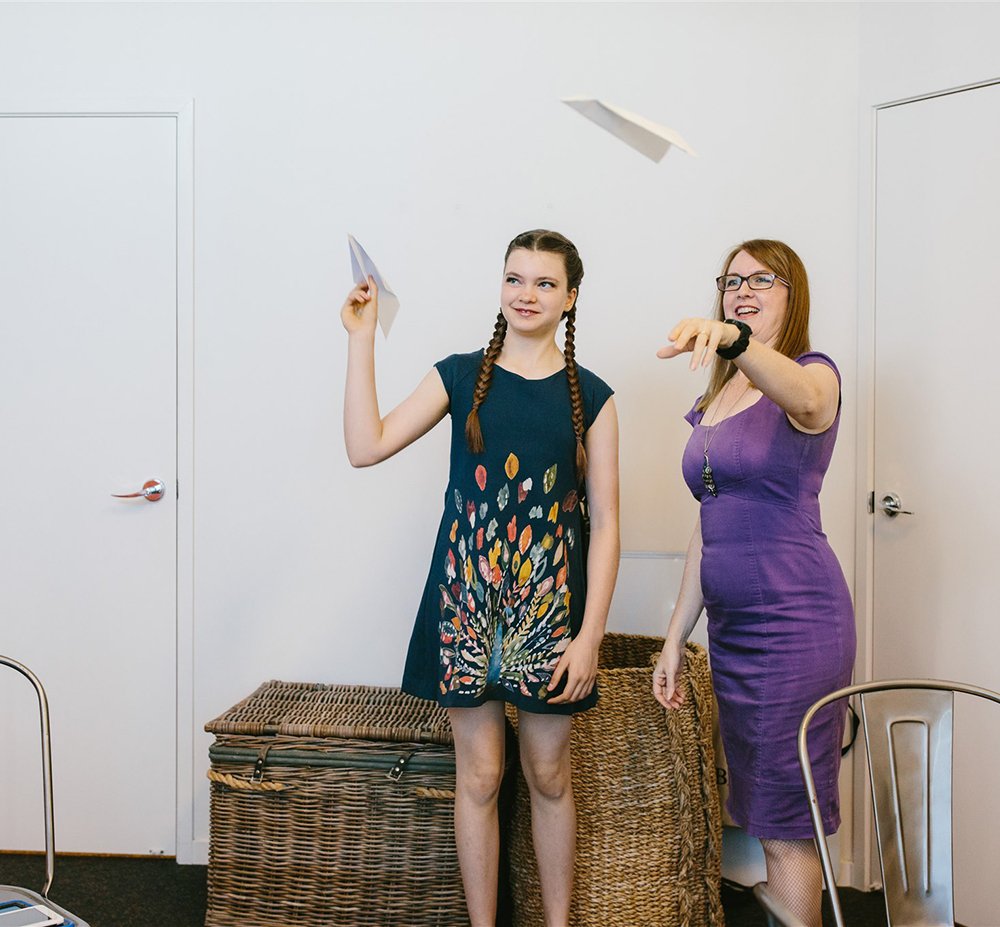 Succeed Healthcare Solutions was born from a passion to provide help to young people with special needs, and a need for this type of help that wasn’t readily available.

Leanne’s passion for disadvantaged children lead her to volunteer for almost a year in three Romanian orphanages/children’s homes in 1998. She noticed that many of the children suffered from delayed development due to the neglect they had suffered before arriving at the centres. Part of the issue seemed to be that many of the nurses in the hospitals would not let orphaned babies be held by staff or visitors or “they would get used to it” and then cry for love and attention. In the Romanian culture at the time, an adult who played with children was often considered to be ’nebun’ (crazy). Defying these cultural norms, Leanne set about helping these children to reach their social and physical developmental milestones before being adopted out to families. That was when Leanne planned and implemented a developmental therapy program for children aged 0-6 one of the orphanages. This even included a trip to the zoo. Some of the children had never even travelled in a car before!

In a newsletter about the program, one of the Centre Directors said, “I’m happy to report that all the children are making progress. On a recent visit, one of our American volunteer doctors who checks the children every month, remarked on how well the children were progressing. One of the little girls was recently seen by someone who had known her before she came to our facility. She couldn’t believe that this was the same child. She was surprised at how responsive she was to people. A two and half year old girl has made much progress. When she arrived at our centre, she refused to eat with a spoon and only took food in a bottle. She was also very unresponsive to people around her. Since coming to the centre, she has begun eating with a spoon and just the other day she smiled. When we first received many of the children they would sit or lie in their cribs or on the floor and rock themselves. Now these same children are up and about and walking on their own. Their muscle tone and social interaction are vastly improved. It’s exciting to see these changes taking place”.

One of the social orphans she worked with wanted to become a doctor. Leanne taught him anatomy and first aid. He went on to be employed as a doctor in the UK, and thanks Leanne for her influence. She also taught him to swim, and he went on to swim across the Danube River.

The child-shaped hole in Leanne’s heart when she left Romania further ignited her passion for helping children be the best they could be, including in Australia.

She has children with special needs herself, so understands how important effective help is.

She continues to provide financial support to underprivileged children including a gorgeous sponsor child in Thailand, and a high school in Papua New Guinea.

Kairi is an experienced administration professional and customer support excellence passionate about helping people to achieve their goals and find their answers.

Sandra is a qualified nutritionist who enjoys providing coaching and support to help people to achieve health and happiness in life. She believes that healthy nutrition and exercise are the keys to good health. Sandra enjoys spending time outside bushwalking, horse riding, photography, travel, learning new languages and going to food festivals. She is also a certified PADI diver and has been scuba diving with sharks!

Kristi is an experienced Physiotherapist who thrives on helping children and their families find their path to being the best they can be. Through her diverse skill set and her unique lens, she is dedicated to supporting neurodiverse individuals on their journey to becoming their best selves. Kristi is passionate about mentoring and assisting teammates to achieve their full potential and gets great enjoyment out of being a part of her teams’ growth and accomplishments.

Leanne is an experienced Occupational Therapist (OT) with a passion to help young people be their best selves and live their best lives. She has a rare skill set in that she is highly experienced in occupational/vocational rehabilitation, paediatrics, telehealth and in-clinic services. She also works as a Practical Demonstrator at Bond University, teaching the Masters of OT students the ‘work’ (injury prevention/occupational rehabilitation) subject. She enjoys delivering both manualised evidence-based programs, as well as designing programs based on the evidence that cater to young people’s interests and needs.

Nathan wants to inspire young people to achieve their goals and build skills in target areas through the provision of therapy services including sport-related activities. He understands the journey that young people with special needs are on, as he also has special needs.

Bridie loves working with children and their families, and supporting them to reach their full potential. Bridie values the importance of having a shared vision between parents, teachers, and children so that we can create goals that are achievable and important. Bridie has a passion for family centred therapy and is dedicated to enduring sessions are fun and engaging, while challenging young people to meet their goals. Bridie has a special interest in helping children and young people manage their sensory issues and the expectations in different environments.